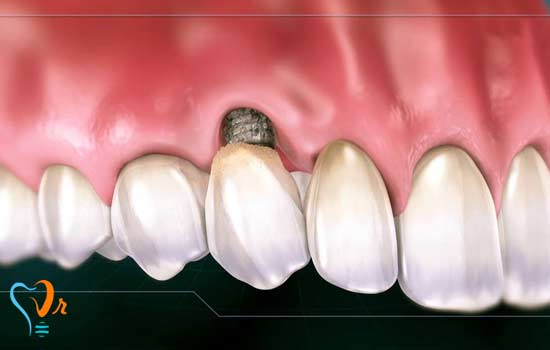 Peri Implantitis: An inflammatory lesion that involves soft and hard tissues around the tooth implant. In addition to the gum, the jaw bone is also infected. Peri implantitis occurs.

In a 2011 review, it was concluded that evidence of peri implantatitis treatment is insufficient and more research is needed.
Peri implantitis is not only a common condition, but also a serious complication if not treated properly. Dental implants have a great deal of potential and can stay intact until the end of their life, but perimplantytis causes loss of bone integrity and early bone destruction and ultimately loss of the implant. For such lesions, the approach to coping with periodontitis may be taken because of the common features with peri implantitis. Both of these diseases begin with the effect of the germs on the gum, and both show similar clinical symptoms, including the formation of a groove between the teeth and the gums (deepening of the envelope) and gingival bleeding. Even in microbiological studies, the cultures of both diseases are similar, but histologically and pathologically the two diseases (gum disease and peri-implant disease) are different.

Peri implantation microbiology is different from periodontitis, and the rate of complex red specimens is lower. Histologically, peri implantitis is more intrusive in the vicinity of the mandibular ridge, and most of the tissue protective layer on the bone present in the periodontitis is not seen here. But most importantly, periodontitis and peri implantatitis do not respond to treatment in one form.

Peri implantitis lesions do not respond positively to periodontitis by improving oral hygiene and scaling. This does not diminish the importance of oral hygiene and professional care such as criminality in preventing peri implantitis, but the problem is that in the case of peri implantitis, other conservative therapies do not have the necessary effect. Peri-implantitis non-surgical treatments have been shown to have poor results using laser or airborne systems. Researches that have investigated the chemical treatment and mechanical shredding (debridement) of tissues do not show good results. In a recent study, photodynamic therapy was used to treat peri-implantitis lesions, which failed. Therefore, non-surgical treatments can not predict definitive peri-implant therapy.

The only treatment that seems effective in solving the problem of peri implantitis is surgical treatment. But surgical treatment is only partially effective. In 2003, surgical and antimicrobial treatment for peri-implantitis was found to be successful in only half of the peri-implantitis lesions over a five-year period. In 2008, an antimicrobial protocol with flap surgery for the treatment of peri-implantatitis could stop the progression of peri-implantitis in 90% of cases for a short-term (only one year). But bleeding in the probe remained in about fifty percent of these cases. Similar results were observed in studies conducted by other people. Although the cutaneous tissue surgery approach seems to yield better results, the combination of surgical implants and tissue repair surgery is the most successful. Schwarz et al. (2008) found that surgical repair surgery has been effective for more than two years and has been able to stop the process of bone loss and reduce bleeding in the probe from 80% to 34%. In 2012, Forum and colleagues demonstrated the efficacy of surgical reconstruction in peri-implantitis and reduced bleeding in probing for more than 3 to 7 years.

Unfortunately, all peri implantitis lesions are not desirable for restoration. For implants placed in thin lingual and phisal wall, peri implantitis usually does not cause spasmodic defects in four walls. In some of these cases, defects occur in the form of complete bone loss around the bone walls, which in such situations will be unpredictable treatment regeneration surgery.

In 2012, Altialy et al. Proposed a decision tree that was morphologically based on defects in the bone. If there is a defect, there are enough walls in the perimeter, but if there is one or no wall left, the apical tab (APF) is suggested with implant placenta, such as drilling the implant surface to remove the threads and the outer surface. The implication of implant placenta is to create a surface that is less likely to cling to bacteria and forms colonies and becomes a kind of decontamination.

In 2011, Karalmakin et al. Examined the longevity and rate of relapse of multiple different treatments in peri implantitis lesions. More than half of the evaluated cases were relapsed and not controlled. Smoking and early illness increased the likelihood of recurrence, and surgical treatment was associated with a lower rate of recurrence. This means that peri implantitis is not only hard to treat, but it should be carefully monitored because the relapse is likely and common. In all proposed therapies, one of the most critical stages is the ever-elimination of the implant surface. The complex topography of modern implant surfaces has become a paradise for bacteria, and the decontamination of such surfaces can be difficult, especially if it is done with non-surgical methods.

There are several ways to dent the surface of the implant. The purpose of disinfection is to detoxify the surface of the implant, and materials such as chlorhexidine, tetracycline, metronidazole, citric acid, laser, and photodynamic therapy may be used for this purpose. A mechanical debridement is used to completely remove biofilms that are made with cortisol, plastic or titanium, a saline detergent, sterilized gas, airborne gas or implant plasticizers. Many specialists come up with a combination of these treatments to make sure that the level of implant surface contamination has been successful.

Several studies have evaluated the effectiveness of various treatments. Schwarz et al., In 2011, investigated the level of laser-doped implantation pollution with plastic crockery and cotton-impregnated wood pellets, and did not see any difference in its results. In 2012, a study was conducted to review various treatments and did not discriminate between mechanical debris, use of disinfectants, aerosols, laser treatments and photodynamics. However, in one study, positive results were observed in comparison of implant plasticization as an implantation superficial detoxification method compared with mechanical debridement.

Romeo et al. In the 2005 and 2007 studies showed that implant improves the results of non-reconstructive surgery for peri-implantitis, and the depth of the groove in the probe decreased from 5.5 to 3.6 mm, and the mean gingival bleeding index was lowered from 2.3 to 0.5. In the review of Klafi et al. (2008), Peri Implantytis Surgery was reviewed. He states that implant placenta is effective in the treatment of peri implantitis and should be considered. Unfortunately, no other comparative studies of implant specimens have been carried out.

Ehrea Schwartz et al. (2013) used a combination of implant implants in the coronal part of the peri-implantitis defects and apical reconstruction, and its short-term outcomes were excellent. However, implant placenta was used only for the predicted suprachristal portion of the implant proposed by Altitila. Impact of implant plasticization as an effective method for surface contamination was not evaluated.

Implant plasticization leads to absolute defecting of the implant surface, but there are four concerns: heat generation, implant implantation in the surgical site, damage to the implant surface and weakening of the implant structure. The production of heat can be easily solved by effective watering and the use of proper equipment. In a dog-based study, 22 particles of titanium were created from implant that caused inflammatory tissue infiltration in adjacent tissues, but the particles were very small and not detectable by computer tomography. Both Schwartz and Romeo argue that these particles do not relate to the adverse clinical implications of implant placenta.

In mintoplasty, the surface of the implants is removed at the microscopic and macroscopic scale, but this is desirable and reduces the probability of bacterial accumulation. The final concern of this treatment is the weakening of the implant structure, which has not been discussed so much since the amount of surface that should be treated and removed by implant placenta is very low. Despite these explanations, they have discussed a few articles about implant placenta. Implant plasticization is considered as a good complement to the removal of the implant surface and the treatment of peri implantitis lesions.